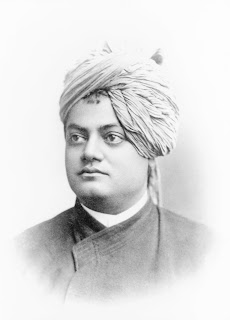 A regal, majestic figure of powerful existence, huge knowledge and deep insight, Swami Vivekananda was just 30 years old when he created a stir at the World’s Parliament of Religions in Chicago in 1893. Three and a half years later, when he returned to India, his homeland, it was as a giant of strength, courage, confidence, love and manliness– the embodiment of the ideal of the ‘man-making and character-building’
education he propagated.

Swami Vivekananda
was born Narendranath Datta on 12 January 1863 in Calcutta in a respectable middle-class family. His father, Viswanath Datta, was an attorney and was a lover of the arts and literature. Although liberal-minded, Viswanath was skeptical about religious practices. On the other hand, Narendra’s mother, Bhubaneshwari Devi, was a pious, kind-hearted lady, devoted to the Hindu traditions. The influence of each of his parents on Narendra was different, yet together they provided a congenial atmosphere for the precocious boy to grow into an energetic young man with high ideals.

During his formative years Swami Vivekananda  developed extraordinary mental abilities which some people either misunderstood or ignored, but which others appreciated and took as signs of an outstanding individual. As a child he liked to play at meditation and would easily become engrossed. Once when he was seated thus in meditation along with some of his friends, the sudden appearance of a cobra slithering across the floor drove all of the children out of the room except Narendra, who remained absorbed in meditation.

Narendra’s power of concentration – of fixing his mind on one thing while detaching it from everything else – was remarkable. In his later life he once shot in succession twelve eggshells bobbing up and down on the water of a river, although he had never fired a gun before. No less striking was his self-control. He remained calm and unruffled, no matter how dramatic the situation he was in.

Ever since childhood, Narendra had had great admiration for wandering monks, and he liked to think that one day he himself would become a monk. But his ambition only became evident during his college days at the Scottish Church College. He began to search out scholars and spiritual leaders in order to question them. But none of them could satisfy him. It was from William Hastie, principal of his college, that he heard for the first time of Sri Ramakrishna, the saint of Dakshineswar. His meeting with Sri Ramakrishna in November 1881 proved to be a turning point in his life. About this meeting, Narendranath said:
Posted by Unknown at 23:06 No comments: